What’s the deal with Michelle Phan?  Who is she?

Just search her name on YouTube and you will see plenty of beauty tutorial videos created by her.  She has been making videos for three years and it paid off for her last year when her online videos became viral.  Her popularity on YouTube was a major factor in why Lancôme chose her as the “official video makeup artist for Lancôme”.  As of February 2010, she will be “creating one special video a month for the brand showcasing different products, trends, backstage events, and more”.  (Quoted directly from her “My Exciting News!” video)

So why am I calling this 22 year old internet sensation a “master con artist”? Well, if you watch her videos, such as “Clubbing Makeup Tutorial Ep 1” and “New Years Glam”, you will see how she transforms her face from a “4” to a “9”.  Makeup is supposed to make a “4” into a “5” or a “6”, or a “7’ into an “8”, but making a “4” into a “9” is egregious enough to constitute fraud.  Michelle Phan needs to be charged with Fraud, Conspiracy, and Accessory to Fraud (look up the definitions yourself) because she is a damn Con Artist.

The fact that she can camouflage her face so much so that you cannot recognize her original “4” face is fraudulent in nature.  To give out tutorial on how to commit fraud is basically a conspiracy against men in general.  Even if one could argue she is not misrepresenting her face because she has shown everyone her true face on YouTube, you cannot argue against the fact that she’s aiding women in misrepresenting their faces, which is accessory to fraud. 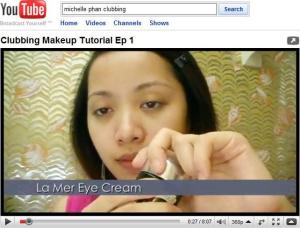 Michelle Phan is a 4

Before you think it is too harsh to charge her with these crimes, let’s go over some basic logic.  Would you say a woman who has a face that is aesthetically pleasing has a definite advantage in life?  I am sure the same could be argued for men, but let us be honest, the potential is much greater for a woman.  A woman that is easy on the eyes can have an advantage over a myriad of life events ranging from landing a job or marrying a rich husband to talking her way out of a traffic ticket or getting free drinks at a bar.  In a sense, the woman is using her “looks” to “buy” a house, a ticket, or a drink.  I do not have any problems with a beautiful woman having advantages in life because we all play with the cards we are dealt with.  Where I do have a problem is when you are dealt with a two of club and you somehow print an ace of spade picture on your card, which is what is happening here.  What would happen to you if you were caught doing that in Vegas?  What would happen if you tried to draw an extra zero on your ten dollar bill and tried to pass it as a hundred dollar bill?  If you got caught, you would be put in jail.

By the same token, what Michelle Phan is doing should be considered as “counterfeiting”.  The same penalties should apply to Michelle Phan and all of her minions of “4 and under” who apply her witchcraft on their faces to fool the rest of the world.  What Michelle Phan is asking women to do is to put correction fluid (foundation and concealer) over a dollar bill (your “4” face) to cover any evidence that it’s just a dollar bill (wrinkles, pimples, freckles, etc) and then use a printing press (makeup brushes and pencils) to make it a hundred dollar bill (a new “8” or “9” face with perfect complexion).

There is nothing wrong with people who put on some light makeup for special occasions because most people can still guess what you look like underneath the mask, but to deceit others by filling every single crevice and concealing every bump on your face and drawing a new face on?  Well, that’s almost as evil as ethnic cleansing.  Okay, maybe not as bad, but you get the point.

Let me now address some of the issues people may have about what I said above.

A. Why are you calling Michelle Phan a “4”?! She is not that bad looking without makeup!

Well, people who make the majority of their income based on looks (actresses, pop idols, Michelle Phan, etc) should be held to a higher standard.  It’s their livelihood to look good so they are failing at their job if they don’t.  A fat model is not a fat person, just a fat model.  Take Sarah Jessica Parker for example, she’s a “-5” for an actress (yes, negative five because she’s mofabugly!) but a solid “2” if she’s was just a neighbor of mine.  Please don’t give me B.S. about how Michelle Phan is not famous because of her looks.  You know for a fact that Lancome would not be paying her a dime if she was a “1” that made herself look like a “5” with makeup.  They are paying her because she does look like a “9” after makeup.  What I will give Michelle Phan credit for are her boobs, which actually look real, even to my female friends.  However, knowing how her face is actually 93.6% fake, I wouldn’t be surprised if the “twins” are somehow artificial as well.  And by twins I mean her boobs, and by artificial, I mean padding or knowing her mastery of makeup witchcraft, “drawn on” with Lancôme boob brush # 327 (ladies, don’t try to search for this brush on Amazon because I made it up).

B. If you are saying makeup is illegal, then designer clothing should be illegal as well and if that’s the case, we might as well walk around naked just to not “defraud” anyone.

Number one, I never said makeup should be illegal, just what Michelle Phan is doing with makeup should be illegal (analogous to the argument that guns shouldn’t be illegal, but it should be illegal to shoot people with guns).  Number two, clothing cannot cover everything and while I agree a person can cover up a lot of fat with loose clothing, at a certain point, people will wonder why you are always in oversized “pregger” suits or why you never wear sleeveless.  You will definitely stand out in a club, as a woman, without either skin tight or revealing clothing, so you won’t be able to hide that fat forever.  Men will be able to do the fat math in their head and figure out what’s going on.   The same goes for men, no amount of money can buy a tailored dress shirt that can cover up the beer belly.  The face, however, used to only have a standard deviation of 1 or 2, but Michelle Phan just increased it to 4 or 5.  Now that any woman can look like a “9”, how are the men suppose to know who truly deserves their attention?

C. What’s the big deal?  This is just like any enhancement surgery or a person who worked out a lot to look thinner.  It’s all fake for the time being.

This is simple.  Enhancement surgeries last much longer than a day, most last for years, so a man won’t have to wake up the morning after with the risk of suffering irreparable emotional trauma.  You won’t have to worry about screaming at the top of your lungs the next morning when the sunlight hits her makeup-less face, which may be followed by you hitting her face as a reflex response to seeing a stranger next to you.  The saddest part would be that you may have been sober when you went to bed, but you will definitely wake up wishing you were drunk, or blind, … or dead.

The bottom line is, what Michelle Phan is doing should be illegal.  Men should be protected from being victimized by these fraudulent acts and women need to own up to the way they look naturally so that they can be honest with themselves and with others.